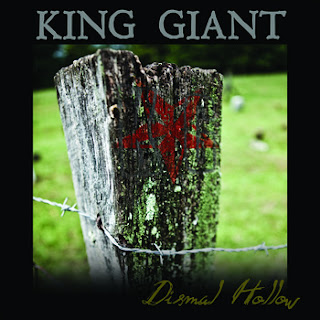 Listen to it on their BC page it is mandatory and no excuses will be accepted!

And thanks to David Kowalski for accepting to answers to a few questions about King giant by mail. Read it below :

-how did you get to form King giant?
DK - Well, we've had a couple of line-up changes so the "how did you form" question isn't really relevant to King Giant as it is today. However, I can say that we all came out of musical retirement to play in this band. All of us played in previous bands, knew one another, or were friend's of friends' in the DC music scene. The idea was simply to get together, jam, write songs, play shows, and have fun.

-what I like in Dismal hollow is the fact that in not just good “doom”, “stoner”, “southern metal”, we can hear in your sound such elements I think, but there is no doom parts, stoner parts, etc..it’s really cohesive and the songwriting is really strong and for me Dismal hollow just sound like a heavy metal classic. What do you think of that?
DK - Thank you very much! We put a lot of time and effort into writing “songs” not just parts, so I’m happy to hear that it resonates with other people. When we write, we just play what feels right and what sounds good. We don’t try to steer riffs in any one direction. Believe me, it doesn’t work! Speaking for myself, I’m heavily influenced by bands that wrote songs that have hooks that have discernable parts like intros, choruses, etc… Riffs are paramount, but a song does not a riff make!
-have you started to write the songs for the next album? If so how are the new songs?
DK - We have. Unfortunately, we are unable to play shows to support “Dismal Hollow” right now due to an injury I sustained last year to my leg. I’ve chosen not to play shows because I can damage it again if I don’t rest and allow it to heal properly. I have to stay out of situations where I know I will over-do it. I told the other guys that they should go tour with a temp guitarist, but they didn’t want to. So, because of all that, we have started working on some new ideas. It’s safe to say that we will continue in the same direction as “Dismal Hollow”, but hopefully extend past it!
-Dismal hollow is so good that it will be hard to top, have you got an idea about how you’ll achieve that?
DK - Hopefully by just doing what we’ve done in the past. In other words, writing songs for ourselves, first and foremost, and by being our own worst critic, we won’t take any short cuts in the songwriting process.

-in the video about the making of Dismal hollow you say that the songs are short dark Americana stories, can you tell us more about that?
DK - For me, Nick Cave and the Bad Seeds were (are) a really big influence. His songs that had narratives really stuck with me. Ironically, it took an Australian to turn me onto to checking out American folk, early blues, and bluegrass music. It’s amazing how dark some of the early bluegrass music is with song topics about sin, addiction, and the devil... it’s just like metal!
-I understand why did you make a video for Appomattox because the song is brilliant, and the video is cool, but what I don’t get is that the video seems to have nothing to do with the lyrics, what is the link between the civil war and zombies?
DK - Nothing. But it was a lot of fun! It really was a logistical issue. We simply didn’t have the money that would be needed to make a Civil War video without taking too many shortcuts, or without it ending up cheesy. Kevin Barker of Mono/Poly Creative, our video director, jokingly said, “screw it, let’s make a zombie video” and a few days later came back to me realizing that it just might work. That’s how it started. Originally, the TV / Newscast in the video was going to play a more prominent role, making references to how the zombie invasion was similar to the civil war because of families and loved ones having to turn on each other, and stating lines like, “not since the civil war has this amount of blood been split on american soil...” etc, you get the idea. But it ultimately got cut from the final edit.
-I’ve seen that you ask people to donate money to help you making this video, was it successful?
DK - Yes. We wouldn’t have been able to make this video without the generous help of our kickstarter patrons. We were blown away at how responsive and generous everyone was to our fundraiser. Also, I want to add that many people contributed their time and talent to making this video a reality. I can’t stress enough that we could not have done it without everyone who pitched in!
-which cool band from your area would you recommend?
DK - Salome, Auroboros (ex-salome, ex-baroness – check them out!), Earthride.... there’s more but that’s all I can think of right now.
-do you plan touring Europe (if you do so you have to go to Montpellier, France!)?
DK - We would love to, but no formal plans as of yet. We need to most likely get another album out there in order to do that. I personally would love to play Montpellier, anywhere  by the Mediterranean is fine by me!
-what can we expect from the band in the coming months?
DK - We’re saving our money to hopefully shoot another video in the next few months. No definitive ideas yet, we’re leaning towards a couple of songs, but we haven’t chosen one yet. It’s not going to be as involved as the “Appomattox” video (we don’t have the money for that) but it should still be a fun video to watch.

-one last thing to add?
DK - Saw the line up for Hellfest, looks great! I wish I were going....Also, just wanted to point out to your readers that while our 2nd album “Dismal Hollow” is available through many channels via distributors, our first album, “Southern Darkness” is not, it’s currently only available through our website. Vinyl lovers, both albums are gatefold, 180gram, colored vinyl! Both albums can be streamed in their entirety via kinggiant.bandcamp.com
Also, Thanks Dennis for your time and interest in King Giant! Cheers!! 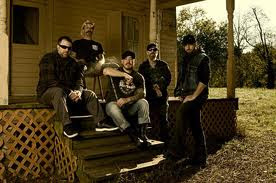