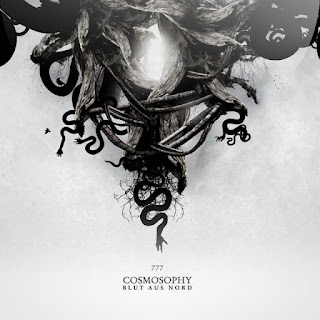 This record is not a black metal record. It is a Blut Aus Nord record. The third part of the 777 trilogy. I don't know if black metal fans or Blut aus nord fans will likes it (and I don't care) but what I know is I like it. the only things left from the black metal origin of Blut aus nord is the dark atmosphere (and even that...since some light appears) and its deep spiritually charged intensity that really good black metal can have. But musically most of it sounds more like a dark new wave or dark industrial ambient. could be as well released by 4AD or Jarring effect. no blast beats. very few metal singing, mostly clean melodic vocals. and even in one song a bit of spoken word / rap vocals (this part reminds me a bit of the french old school rap band Kabal). what makes the link wih the other B.A.N records is the cold industrial feel of the sound. and the quality. Cosmosophy is five long and good songs and a really good record. take it for what it is. I really recommend it.