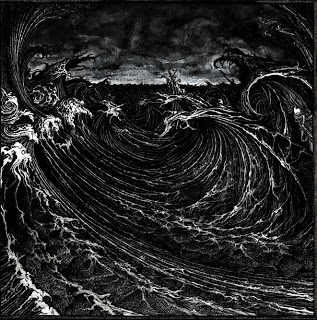 Just a look at this classy cover art and you guess that maybe this death metal record will be a bit different. you guessed right. Necrovation comes from Sweden and since 2003 plays some good ol' death metal, but with this second and self titled album (on Agonia records) that offers something that explores some different ways. They mix with taste the old school swedish recipe with some different tricks. The sound is raw but also powerfull and this fits well with the epic darkness that they add to their grim songs. some massive twisted grooves and occult atmosphere can reminds sometimes Morbid angel, bu also can evoke sometimes a darker and more brutal version of  Metallica's instrumental songs (in fact they have their own melodic instrumental with The transition). they really succeed  in injecting some freshness in their old school death metal brew. And it makes one if the best death metal record for this year in my opinion.