Slug guts-Playin' in time with the deadbeat (2012) 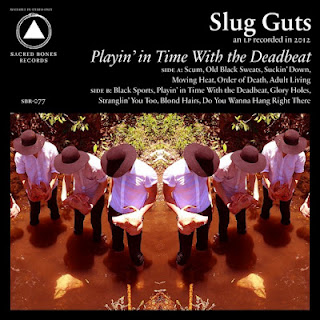 Mens in a swamp holding pigs heads? no it's not a black metal or sludge record, Slug guts is a band from Brisbane playing a kind of post-punk / no-wave. they released this year their third album called Playin' in time with the deadbeat on sacred bones records. if you like post-punk / no-wave or bands like Birthday party, Nick Cave and the bad seeds or Gun club this record could really be a good pick for you. It ooze with desperation and unease, the guitars are cold and sharp, the singing is on the edge, and the sax adds a nice dark, menacing and dirty groove.
On their Sacred bones page it is said : "Playin’ in time With The Deadbeat was written during a year which saw members of this seven piece endure trips to the mental hospital, jail, court trials, death, rehab, and bouts of violence following thousands of kilometers spent in a van." not surprising all that resulted with this record...I don't recommedn the process at the origin of it but I really recommend the record!