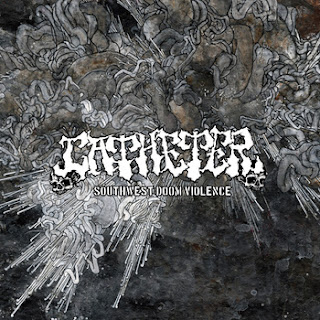 Southwest doom violence, released this year by Selfmadegod records (a good record label from Poland that also released last Encoffination among other good stuff),  is the second full lenght by Catheter from Denver. The first one was already cool but unlike this one it suffered from a weak production. Like many bands nowadays they injected in their grindcrust mix a heavy dose of sludge, a bit like a fight between Napalm death and Eyehategod, a mix of early and modern grind, crust and sludge (southwest doom violence they say. that's a way to describe it!). the good thing is that they're doing this grind/sludge thing better than others, with a good, dynamic and diverse, songwriting and a really good execution of the songs. good riffs, good drumming and good vocals. and more importantly they know how to make it groove!

check it on the Selfmadegod bandcamp

and here's an interview with H murder, drummer in Catheter :


-can you present the band briefly ?

the band is now brandon hayden bass/vocals, jeff montoya guitar/vocals, and h murder drums /vocals
-a few words about Southwest doom violence?
it was an album that got recorded with a different line up and after many listens to the record it was not up to our standards so we rerecorded the whole thing and added a few new songs
-How was it written, recorded, produced?

it was written over the course of 7 years some  songs changed rearranged songs added some dropped and it was produced by steve goldberg of cephalic carnage and catheter
-7 years between Dimension 303 and Southwest doom violence, what’s the reason? Did you prefer recording a lot of splits and Ep’s?

actually we did no splits in that time except one with street walker but the recording went through a few line up changes over the years so thats why it took a while to get finished
-seems to me that you added a heavy dose of sludge in your music since Dimension 303, a few words about that?

-in your opinion what is grindcore and what does it means to you?

in our opinion grindcore was a way to bond with friends around the world with this similar taste in music it was a tight knit scene but over the years it got kind of trendy with this more grind than thou attitude and lost the unity and bond it once had that was special. don't get us wrong there is that bond going on still but not like it was in the late 80's early 90's
-what about your lyrics?

Catheter lyrics are a wide range of things from personal trauma to world wide events to anger to not so serious topics
-which bands from your area would you recommend?

Jeff has another band tree of woe, and really other than that ACDC is killin it Laughing dog is amazing!
-any hope to see you play in Europe?

well if you missed us in 2012 i doubt we will be back any time soon
-what do you plan for the coming months?
we are on a break now did a heavy dose of touring and we each follow a different direction in our personal lives.
-something to add?

check out the facebook page and get our new album!
à 18:20