Three days ago I posted a review of the first volume of the Monomanic compilations series by Blastbeat Mailmurder. Here is this review.


And here is the Monomaniac page on the Blastbeat mailmurder website : MONOMANIAC

I asked Panos Agoros, the man behind Blastbeat Mailmuder a few questions about BBMM, the Monomanic series and its first volume (I also recently posted his answers about the recent record of Dephosphorus for which he sings, you can read my review of the excellent Dephosphorus record, Nightsky transform, and the interview with Panos about it at this location).

read below the Monomaniac interview :

-how did you get this idea of the Monomaniac compilations?

Panos: That was while I was hearing a new song by a local brutal death/grind band, Atavism. They are friends of mine, and have been really slow at releasing new music these last years. So, this new track was a surprise because I didn’t expect anything new from them, as well as because it had a better sound than their previous releases.
I started to brainstorm as per how I could include the song to a future release. I first thought to use it as a side to a split-7”. Then I realized it was just one minute long! It would be  a waste for a 2-way split and even for a 4-way split - since you can fit at least 10 minutes of music at good sound quality to a 7 incher… That’s how the idea occurred to me of compiling several one-minute songs to a 7”!
In order to get all the background, I must mention that ever since I started collecting vinyl I particularly loved 7”EP’s that featured more than 2 songs. I have always felt some sort of weird satisfaction when a 7” featured 3, 4 or more songs. I don’t know why.

-how did you choose the bands?

P.: I started asking to friendly acts and bands that I have been in touch with. In the meantime, Andrew Childers from the excellent blog Grind & Punishment really liked the idea, and volunteered to help me out and ask to a few good grind bands that he was in touch with. That’s how Cloud Rat, Detroit, Thedowngoing and Body Hammer signed in.

-how the bands reacted to the idea of writing songs around one minute long? Most bands on the compilation are used to write short songs, but others usually write longer songs, did they took it as a cool challenge?

P.: The first most interesting thing about the Monomaniac series is exactly that, getting non-grind bands to follow the grind methodology and write a really short song! Some musicians really like the challenge of concentrating their band’s music and style in 60-90 seconds.
The second most interesting is getting together those short songs written by bands of different style and background, but all sharing a common passion for intense, unmitigated underground music and the associated culture/aesthetics.
I hope that if the series go well, the whole concept will get so infectious that eventually I will be receiving spontaneous submissions even from bigger bands (like say, Napalm Death, Immolation or Dark Throne) who will write saying “hey, we think that the Monomaniac series are cool, take this new song that we wrote exclusively for you!”.

-something to say about the order of the tracks on the compilation?

P.: The running order is always extremely important but in the case of a compilation it is crucial in order to maintain the listener’s interest and an overall cohesion.
To start with, I decided to group the grind-ish bands on one side and the black/death ones on the other. This helped assure a stylistic cohesion but on the other hand I hope that most of the people who will buy it will listen to both sides, and not just to side A if they are grind freaks or  to side B if they’re black/death fiends…
In the future this might change, but it will depend of the tracks at my disposal. A blackened grindcore song can be squeezed between a death metal and a black metal song, and vice versa…
Now I will detail a little bit the choice of this volume’s running order. 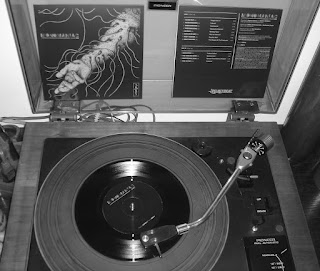 -two tracks by Thedowngoing are also on their latest record, it’s an exception isn’t it? The other tracks are exclusively featured on Monomaniac?

P.: Good question! All tracks submitted to Monomaniac must be unreleased and somehow exclusive. Demo/live versions or remixes might fit if they are relevant and of good quality.
In the case of Thedowngoing there is one song on Monomaniac that they have re-recorded for their “Athousandyearsofdarkness” EP, “Floorboards”. I realized this a few weeks before the release of Monomaniac vol.1. I could have asked them to pull it down, but I didn’t because I guess that they’ve somehow missed the exclusivity part of Monomaniac’s concept. Plus it’s a different version than the EP’s and only 1/3 (20 seconds) of their contribution, so I really don’t mind!
The other TDG song that you’re referring to is “Hikabusha (reprise)”. Like the title clearly suggests it’s a reprise which means (quoting Wikipedia’s article): “(…) repetition or reiteration of the opening material later in a composition (…)”. The full “Hikabusha” song that is featured in the EP is 34 seconds, while the reprise is 15 songs long, so it’s definitely not the same song!
There is another similar case, DETROIT’s “Birthday Party”. It’s still unreleased/exclusive to this moment but they have re-recorded it for a future split-LP with Dysplasia (that is going to be an excellent release, by the way). I heard the new version and it’s quite different, having a different sound and more/different vocals/lyrics. I must say thay I prefer the original version though!
Anyway and in order to recap, the vast majority of the songs featured on Monomaniac are new/exclusive material. There might be a couple of exceptions over time, but I am 100% committed in maintaining high quality standards and not including any fillers.

-do you know already which bands will be featured on the next one?

P.: I know some of them and have already a few tracks ready!
The bands that have already submitted material are:
I’m expecting in the next few weeks tracks from:

-do you already know how many monomaniac compilations there will be? Maybe it depends on the success of the first ones?

P.: I will keep releasing new Monomaniac volumes as long as there is enough interest for the series, and as long as I have the time/money to do it… But I like to take one step at a time. I hope vol.1 is going to do fine and in the meanwhile I am preparing vol.2. Support Blastbeat Mailmurder and we will carry on!
-what can we expect from Blastbeat Mailmurder in the next few months

P.: Next release in line is “The Mignola Split”, the ever-delayed split-cassette between Kommpound, my personal field recordings/noise/drone/ambient project, and Hellboy 106, a local comrade doing noise. It is a tribute to Mike Mignola and his legendary Hellboy series. It will be Blastbeat Mailmurder’s first cassette release, limited to 60 red tapes. 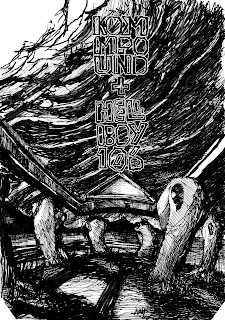 I guess that if things go well, Monomaniac vol.2 should be out early next year (after the end of the world, that is). I will also release at some point two 12”LP’s, and this is a scoop!

The first one, is the self-titled MLP of Injekting Khaos, which is the black metal band where Nikos played prior to Dephosphorus. It is their final recording, and you can stream two out of its five tracks from their bandcamp page. The format will be one-sided 12”MLP with an etching/engraving on the other side, and it is going to be a co-release between Blastbeat Mailmurder, the band, Temple Of Flesh, and Order Of Theta.

I will also (co-)release at some point the final recording of another now defunct band, Kvazar. They were one of Greece’s finest grindcore offerings, as well as friends of mine. I have committed not only to release it, but also to lay down the vocals! It has the length of an EP and most likely will be released as a split-LP with a foreign band that has yet to be determined…

That’s all for now. Thanks so much for your support Dennis, it is appreciated and good luck with Blasting Days!!!

Stream/download Monomaniac vol.1 now from Blastbeat Mailmurder’s bandcamp page! If you don’t have a turntable please consider buying the digital version for the amount of your choice. That will help us finance the next volumes!

You can purchase the 7”EP either from the BC page, or from our paypal store.

Last but not least, we don’t yet have a fancy web store featuring all the titles that we distribute but we’re working on it! Until then, please check out our online catalog. It’s full of killer items. Make your choice then drop us an email. We’ll get back to you asap with the postage cost to your location. If you support us, we’ll keep bringing you inspiring underground releases!