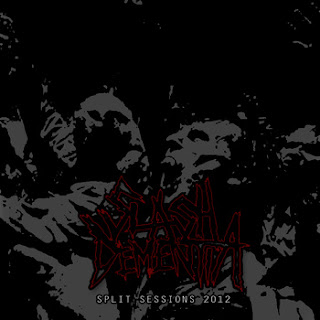 This is my second review of this finnish grind band, the first one was about "wheels of Babylon " that they released in january 2012 and you can read it HERE. as the name let you guess the splits sessions 2012 are the reunion of tracks that will appear on splits with Zombie raiders and Agamenon project (I don't know these bands). At the moment it is a virtual release that you can stream / download for free on their bandcamp. What Slash dementia plays is grind / powerviolence with a rocking vibe, a bit like a grind version of the death'n'roll period of Entombed. If you're into this kind of stuff you'll find the splits sessions a cool and enjoyable listen.

Slash dementia's splits sessions 2012 on BC

the guys from Slash dementia answered to my questions by mail, read the interview below :

-how did Slash dementia started?

Konsta: Slash Dementia was born from ruins of our short-lived hardcore punk project called "Anaalivapina". It was a hot summer and we needed a therapy project. Then we made a couple of fast grind tunes and recorded our first EP "Symptoms Are…".


-do you play or have played in other bands?

Lassi: We all have played in many different bands for a long time and we've had other bands with the same guys as well.

-what about the split sessions, how was it planned, written, recorded, produced?

Otto: Drinking lots of alcohol made me do rock 'n' roll things.

Lassi: We had a couple of split requests and we started to work on the new songs based on that. We don't actually know that are the splits even released yet.

Konsta: We knew that it will take a lot of time when the splits will get released so that's why we put it out as a single release as well. So you can think that as a one album as well. About writing, Otto did most of the songs on this one and Lassi did all the lyrics as well. We recorded the album in our rehearsal place. I recorded my other band's drums at the same sessions so I had to blast something like 34 tracks in one day…. Guitars and bass were recorded at my apartment and vocals again in the rehearsal place. I did the recording, mixing and maybe we could say producing as well. I am quite satisfied how the recording sounds. It is quite raw and powerful.

-I felt that the songs on the split sessions have a rock'n'roll vibe a bit more pronounced than the songs on Wheels of Babylon, do you think so?


Konsta: Yes. That's because Otto did all the songs. Maybe we'll blend this combination of rock and grind a bit further on the next album?

-what about the finnish grind scene? how do you fit into it? which bands would you recommend? Konsta: The scene is growing a lot here. There are not too much bands and people know each other well in the scene. And it is great that the quality of the bands is awesome! If I had to say just a few names then I'd say propably Feastem, Cut To Fit, Spawn From Deceit, Nistikko, GAF, Death Toll 80k….. We fit into it pretty okay though we'd like to play more shows.

Otto: I don't think grindcore is a very big deal for me, I like rock n roll.

Lassi: To me it means that I can destroy my voice.

Hene: I don't know. Having fun and playing together.

Konsta: Anger management and a huge wall of noise.

Otto: Everything what we do is DIY. Everything that goes out of this town where we live is DIY.

-how did you get into grind or extreme music in general?

Konsta: I was listening to Carcass' debut album in high school with my friend and it sounded so chaotic and fun so I started to look for more bands like this. Then I found Regurgitate, finnish GAF and Napalm Death and more and more great bands. I wanted to hear something really extreme because I was tired of all of the boring metal stuff that is being played everywhere.

Otto: My friend played me Nasum's Human 2.0. once, there it started.

Lassi: I don't actually even remember when I first heard grindcore…..

Hene: I must say that to me it all started from Cause For Effect, a finnish drum 'n' bass grind core duo!

-what can we expect from Slash dementia in the coming months? more releases planned?

Konsta: We'll start working on a new album soon. Then we'll do at least one more split and there's been some ideas of a cover album as well. Also we've been thinking of doing a music video for some songs/songs from the next album.

-any final "full of wisdom" sentence to close the interview?