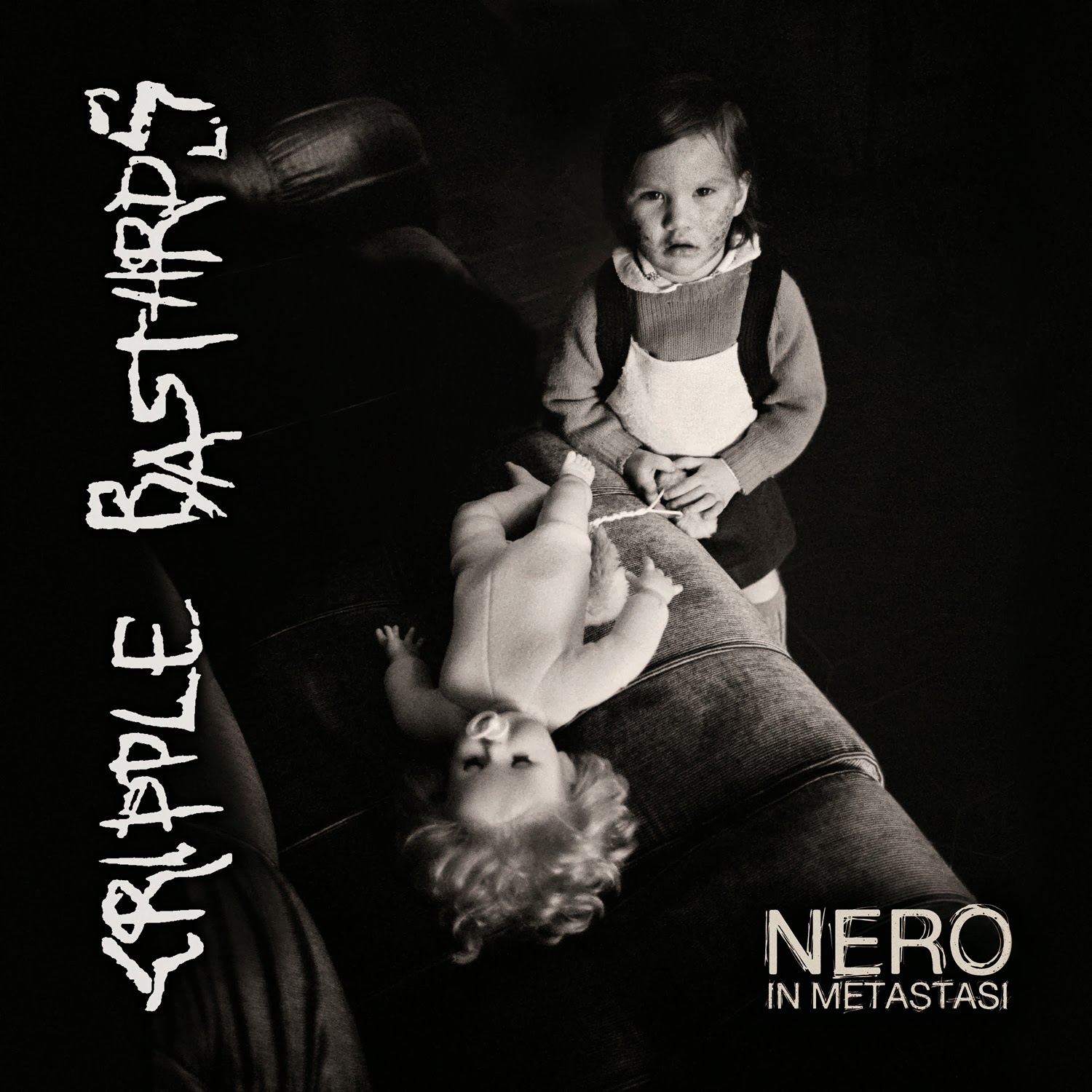 When I started listening to grindcore, something like 15 years ago, Cripple bastards were already there, one of the most respected grindcore bands, one of the first (they formed in 1988!). I knew I loved grindcore because I loved bands like Napalm death and Cripple bastards. if you wanna know what is old school grind, what are the roots of grindcore, of course you have Napalm death, but just after ND, a few other bands defined with them the sound of grindcore and Cripple bastards are one of these. take some hardcore punk / trash crossover, add some death metal brutality, play it faster, add some more urgency and craziness, add again some more speed and relentless agression and you have it. Cripple bastards. grindcore. ok, you get it. now you'll be pleased to hear that the italian grind pionneer are releasing a new full lenght album (their fifth, but of course they also released a lot of splits, EP's, etc.), called Nero in metastasi (with Relapse records, as was their previous EP Senza impronte). have they slowed down, mellowed bit? you guessed it... they have not! it's still fucking brutal and in your face. it's still as grind as it used to be. they stuck to their successfully tried and tested formulas. but tried something different in the end of the album (so it's not breaking it's crushing dynamic) with a slower and longer song with some spoken words. the result is really dark and quite creepy. a good try, ending the album in an interesting way.

you can stream it on the Cripple bastards Relapse Bandcamp page.

their singer Giulio answered to my questions by mail (a big thanks to him!), read it below :

-you were among the first grindcore bands, before the name did not even exist, isn't it? Could you tell us what was your state of mind at the time? Was there a feeling that something was happening like the growing of a new musical movement?

Well, actuatlly we have started the Cripple Bastards in 1988 (although me and Alberto the Crippler had been already playing together fast stuff in 1987 with other names) when in other countries – the UK above all – what was about to become Grindcore was quite evident already. I would rather say we have been the first in Italy, and yes - in the early years even if probably the term “Grind” was around already, we hadn’t heard it yet as we were kids with not many contacts outside of our area and because in Italy everything arrives later. So we were aware of doing some kind of the fastest possible Ultracore/Thrashcore, we simply wanted to play as fast and extreme as we could, it was very instinctive and we didn’t have many reference points.. neither we had a feeling that the genre was growing until we went into that phase that every week Earache Records and Manic Ears were releasing something in that style we loved, from Napalm Death to Carcass, Unseen Terror, O.L.D., Terrorizer, Intense Degree, Sore Throat and all the stuff of that kind that followed.

-do you think grindcore (or grind related music) can be understood as a reaction against the recuperation and commodification of punk?
Probably we have never tried to see this kind of meaning behind, but rather have always simply seen it as a total outburst of rage and violence, a way to vent out hatred and that negativity and frustrations killing us from the inside.

-isn't one of the idea behind the lyrics and artworks of the band something like “we don't have to tell people what they should hate, it's enough to just show them the worst of reality and they will make up their mind in their own way”?

Partially yes, but some points are also made very clear and direct. If a majority are more focused on the kind of imagery/scenario surrounding us leaving space to the reader to make up their mind in their own way, others are very explicit and straight to the point. On this album we have really direct lyrics about topics like the booking agents’ mafia here in our area (“Promo-parassita”) and the music industry forcing reunions (“Agonia di un rientro forzato” = “Agony of a reformed band”). So it’s variable from song to song. .  By the way, being our lyrics in Italian, both the CD and the LP include extensive translations in English made by a very good translator that has followed us for years and deeply understands the sense of our lyrics, so I can assure that these translations recreate very well the mood expressed.

-let's now talk about your new album, how was it composed, recorded and produced? Did you proceed in a different way compared to your previous records?

We usually start from some guitar riffs, then we jam with the drummer and give shape to a more defined structure retouching it over time and repeated listens. Then we record a raw instrumental version and I go to a friend’s studio to add a rough vocal line, coming up with an embryonic demo version to be listened/discussed together with the other members. Then we move to a final structure adding more touches, fixing the vocal parts and adapting the lyrics to the sing. “Nero in metastasi” was recorded and mixed at Studio Fredman in Gotheburg/Sweden except the vocals that were recorded in Italy at Toxic Basement Studio. This was our 3rd time at Fredman in a range of 7 years.. it’s always a good choice for us.  Fredrik and his assistants thoroughly understand our style and our needs and how a C.B. album needs to sound in terms of power and intensity. This time it took us few days more than what we spent there when we did on the previous "Variante alla morte" but we divided it in 3 phases, we first did 5 days to record all the instruments, then as I mentioned all the vocals here in Italy and then we went back to Gotheborg for a week to assist the final mix. Organizing this work through a longer range of time has given us the opportunity to listen over and over the recording through its development and be much more determined when the mix started. With "Variante alla morte" the work was done all in one go in the same session and did not allow us to realize a variety of details and refinements that emerge only over time after many repeated listenings. So definitely the production on "Nero in metastasi" is more accurate and mature than on the previous full length. As for the songwriting, the main difference compared to previous works was the second guitar added, this new member has been very helpful in arranging songs, refine the riffs and consolidate a song structure to its final shape. It's been even more a teamwork than before.

-In your opinion how does Nero in metastasi fits in your discography?
It’s a natural evolution to albums like the previous “Misantropo a senso unico” and “Variante alla morte”, taking them to a more mature and cohesive dimension but still keeping strong the elements that have always characterized the CB’s sound, ultra-fast and nervous breaks, the Hardcore styled aggression and the big variety in the guitar work. Being it our first full length on Relapse, each one of us has tried to take out really the best of creativity and passion to make it an album that could represent in detail our 26 years of existence pointing out the best elements of our style.

-can you tell us about the song called “Splendore e tenebra”, which is different from what you do usually, how would you describe it and what was your intention with this song?

“Splendore e tenebra” was a big challenge for us in many ways..  The starting idea was to write a sort of soundtrack that could function as background music to this highly disturbing poem called “The pit” written in WW2. We were inspired by an obscure Croatian band called GRČ that had put it into music back in 1987 with a fantastic song called “Krv je moje svijetlo i moja tama” (Blood is my light and my darkness) but of course we wanted to do something special in our own way. The poem talks about a column of prisoners in a death camp progressively being executed by cutting their throats and having the coup de grace with a hammer smashing their heads, then being all thrown into a pit and covered by quicklime.  The writer describes himself as among the prisoners and staying alive after the hammer blow, buried by corpses in the pit. We removed all parts that could give an excerpt of hope and positivity to fit even better the CB’s imagery of pain and death. There is no particolar reason why the song ended to be so slow, longer and sludgier than our usual style.. Probably the starting influence of GRČ’s song (that is actually very slow and repetitive) gave us the approaching input, then the fact that most of the vocals are spoken made us move towards the direction of giving more “breathing” to it with heavier parts. Anyway, it’s a 9 minute long song, which is quite an unusual feature on a CB record..

-what about the italian grind scene nowadays? Which bands would you recommend?

I’m not much into today’s Italian Grindcore bands because they all seem to be quite one-dimensional to me. I’m more into Hardcore bands like ED, RAW POWER, CONCRETE BLOCK, CARLOS DUNGA and similar outfits.  Just to mention them, the currently active Italian Grind bands are stuff like ZEITGEIST, DIORRHEA, TSUBO, BUFFALO GRILLZ and so on.

-which evolution would you like to see for underground music in the future?
More individuality and imagination, we need a sort of “raze to the ground” change that could bring things back to a dimension like as it was in the 70s and part of the 80s, when bands were really creating something new of their own with talent and room to experimentation and courage. All what I see today is just imitations and boredom played in a flat way.

-what is planned for Cripple bastards in the coming months?
We have an upcoming tour in Japan and Australia, later on we’ll do several shows here in Italy to introduce the new album, then Maryland Death Fest in USA, then some summer festivals.

-something to add?
Thanks for your support and the space you gave us here.
More about CB on these sites: