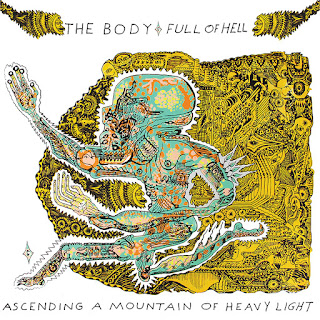 Ascending a Mountain of Heavy Light is the new collaborative album from The Body and Full of Hell. I don' really know how they worked together, but like their previous collaboration it sounds more like The Body featuring Full of Hell here and there and most of the time it could pass by something from The Body alone. I still wonder what is the point of collaborating with a noisegrind band if you end up with only thirty seconds of blast beats on the album. That being said I won't complain much because the album is awesome and among he best The Body released. On this one their industrial doom / power electronics is surprising, daring, and heavy and noisy as fuck with some finely crafted touches of light, just enough to bring the perfect contrast. Easily one of my favourite albums released this year.