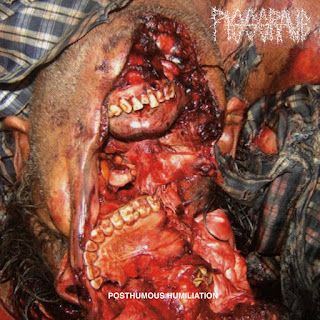 I'm back, and with maximum barbaric brutality with the second Pissgrave album, Posthumous Humiliation. I could just let you have a look at the artwork because it could be enough, it really gives a good idea of how the album sounds and what it's about. But I'll still say you can expect the most violent and relentless death/war metal and that the band from Philadelphia really did a good job at doing an album so intense it's fascinating. Posthumous Humiliation will definitely stand as one of the best, most mercilessly dirty and brutal  and most memorable death metal album of the year.