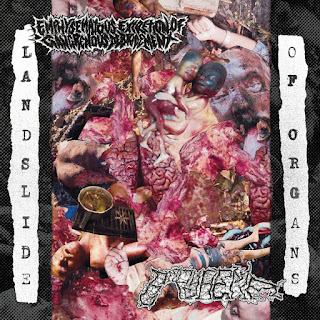 I usually don't listen to goregrind  (I love grindcore but I'm more into grindpunk, death/grind, or nosiegrind) but this split with Emphysematous Excretion of Gangrenous Debridement and Empyaema, nicely called Landslide of Organs has been released by the excellent label Nerve Altar, so I gave it a try. And definitely don't regret it since it has what I can like in goregrind aplenty : the manic snare drum beating and the savage groove. Also, its rooted in old school death with real riffing and the vocals are fittingly grotesque but not too artificially so. It's more on the Carcass/Regurgitate side of goregrind than on the more modern slam side. ExExGxDx side of the split is the one with more old school death in it, while the Empyaema is more pure gore, but both are excellent at what they do, and I enjoy both of them. Cool stuff! (If I dare say...).