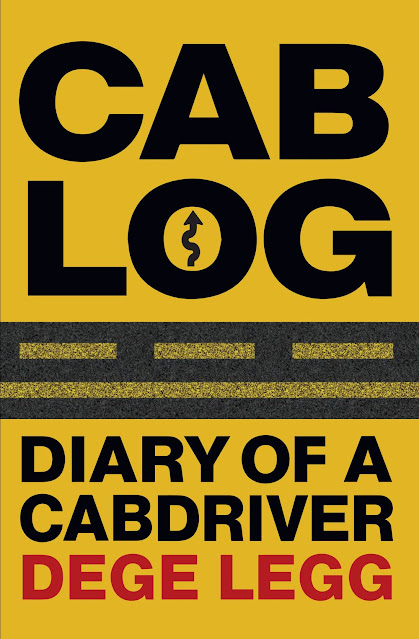 Dege Legg is very likely to appear again in Blasting Days on the occasion of a Brother Dege & the Brethren album. He’s a talented musician, composer and singer, and I enjoy his americana / blues rock music. But it's for his new book that Tony Bonyata, of Pavement PR, who regularly sends me good music to review, contacted me. The synopsis quickly grabbed my attention, promising an interesting and enjoyable read, and it turned out even better than I expected. So, after more than a thousand records and a dozen movies, here’s the first book reviewed in Blasting Days.

With his experiences as punk rocker, bluesman, journalist, warehouseman, mechanic, and philosophy student, among others, Dege Legg could probably write volumes documenting his creative and adventurous life. His new book focuses on one of his past activities, and he had a lot to say about it. Cablog : Diary of a Taxi Driver is about the five years he spent doing the nightshift with his cab in Lafayette, southern Louisiana. Lafayette is not a big town (roughly one hundred thousand inhabitants), not the craziest city in the world, but Dege Legg can testify it has more than its share of troubled places, dramas and crazy characters. Dege started to write about his new job, and he shared his experience in stories for the Independent Weekly readers. Cablog started as a compilation of the best ones, dozens of amazing stories.

It’s very often funny, often sad as well, sometimes both at the same time. There’s what you learn about the curious job of driving a cab in the streets at night, but above all it’s about the people Dege Legg met doing it, and the impressions they left on him. With him, we meet some regular folks, but also the drunks, the crackheads, the thugs, the homeless, rich people, poor people, old or young, a lot of craziness, but each of them unique. A multitude of freaks and weirdos, people and absurd situations that you could expect in a Hunter S. Thompson report, but more real. And the author excels at portraying them in lively colors, with a lot of empathy and a stimulating take on life, avoiding a judgmental or heavy tone. You have almost the feeling you are with them in the cab (but fortunately in the comfort of your living room!) and have a glimpse of their adventures and misfortunes. Cablog is 200 pages of interesting stories, with people that are often not what you’d expect at first, with all their complexities and contradictions, strengths and failures. It’s not just about the Louisiana nightlife, it’s about humanity. Now let’s try something. Let’s open the book at a few random pages. What do we have on page 86? Driving a redneck drug dealer with a lady in an armchair, and how we’re all addicted to something. Then on page 143 a gay cowboy and why he’s going home alone. On page 185 we find Dege helping an Okie family overcome their accumulating bad luck. Last one for the road? Page 149, an old man, faith healer and gambling enthusiast.

The stories and the people would be enough to make Cablog a memorable read, but there’s also the poetry. And I’m not only thinking of the few poems included between stories, which are excellent – not interrupting the flow of the book but on the contrary channeling and deepening it, opening a new perspective on the author’s feelings –, but also the poetry in the stories themselves and the way they are told. A living poetry coming from hard-learned experiences and daily trials. Cablog would have been an excellent compilation of anecdotes, but it's much more than that thanks to this writing style both realist and poetic that gives it depth and broadens its scope, echoing with the best of modern American literature.