Emanation - The emanation of begoten chaos from od (2014) 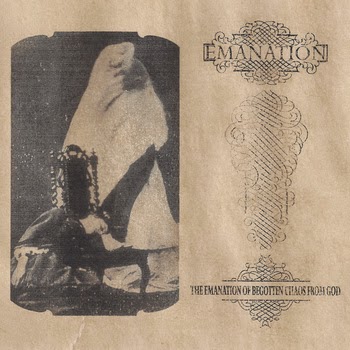 Emanation is a spanish one man band creating some very personnal music that could be described as "black ambient noise kraut funeral metal". Emanation released this year its first full lenght CD album (after an excellent cassette and a 12'') called The emanation of begotten chaos from god. the black metal association is mostly due to the overall dark and occult amosphere because the blast beats are rare, the beats being mostly slow and repetitive or sometimes bordering free jazz , and the vocals are black metal but it's mostly instrumental. also there are a few guitar riffs but it's more layers of noise, guitars, electronic, keys (maybe even a bit of brass or accordion?).  Emanation is really good in creating weirds and disturbing amospheres with some hypnotic grooves and a touch of dark psychedelia. if you like the darker regions of noise or the most avant-garde black metal I really advise you give it a listen (people liking Aluk todolo, Spektr or Blut aus nord would probably dig it).
high quality stuff of a unique kind. I recommend it highly.